I’ve uploaded a new program to the repository, a MIDI Sequencer that allows you to use miniMO as a pattern sequencer with any MIDI device.

Software-wise, the sequencer uses a modified version of the SoftwareSerial library, which lets me set any pins I want for MIDI In and Out; this feature is critical, as I’m bound by the original hardware design. I had to modify the library because by default it takes over an interrupt which the program needs to detect button presses; after my changes, the library won’t control the interrupt unless I request for it (never, in this program). With that issue sorted out, configuring SoftwareSerial couldn’t be simpler:

later in the program, sending MIDI messages is as easy as using the write method, as for instance:

Hardware-wise things were a bit harder, as I had to build a MIDI cable and figure out what pin to use for output:

The finished cable is reliable and trouble-free, which is quite surprising as it is actually two hacks in one! :D. It stays in place just fine, and I’ve got more than 12 hours of continuous use of the sequencer on a single battery (and counting -I haven’t replaced it yet). The only drawback I’ve found is that I cannot fit a top cover because of the bridge, so I might modify the cover’s design to accommodate for it. 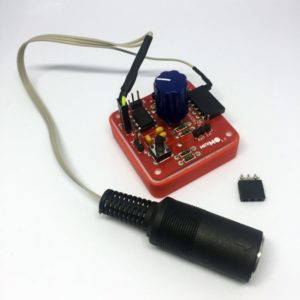 UPDATE – I ended up revising the top cover; the new design has a cutout for the bridge, and a laminated faceplate with text and markings. I’ve also improved on the MIDI cable, which is now easier to build and has a better finish. 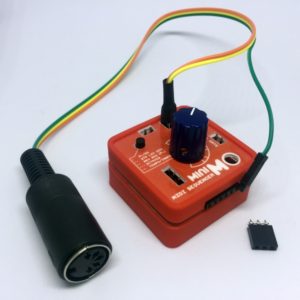 Feature-wise I’ve packed as much functionality as possible, considering the limitations of the interface. Before uploading the program, there is a “user-friendly” section of the code with a number of relevant parameters to decide on, most important being the list of notes to use in the sequences:

I could use all the notes in the chromatic range, but I think it is more practical to think on what kind of patterns I want to generate, then select the notes accordingly: it makes live-editing easier, and since the module generates a random pattern every time it is turned ON, limiting the notes allows for interesting patterns from the get go -I usually turn the unit ON and OFF a few times until I get a pattern I like, then work from there.

Other relevant parameters in code are the MIDI Channel, the default note velocity, the pattern length, the maximum number of octaves for octave spread and the intervals for pattern transposing, which I have set to two octaves, and Tangerine/Zimmerian intervals, respectively.

Once the program is loaded and running, it plays a random sequence, which you can edit and manipulate in various ways:

When the unit starts playing, the knob controls the tempo; you can access all other features via button presses. Editing requires that you remember to press the button once to enter or exit the mode, and press twice to change the note length while editing, but that’s about as hard as it gets. Also, you can edit the sequence at any time: if you’re transposing, the available notes also get transposed accordingly.

That’s about it at the moment, but there’s room for maybe two extra features in the future: external sync (the module already sends trigger signals via I/O 4, so I would have to figure out how to make it a “slave” on startup, then disable tempo control and make it follow triggers received on that same port), and transposing from a MIDI keyboard (for which I’d need simultaneous MIDI in).

In all, I’m really happy with this little sequencer. It’s a ton of fun to play around with, and it expands miniMO’s uses to about every keyboard and module ever released!