Let’s see what this program does, using captures of frequency plots. For the sake of clarity, I will use sine waves. The plots come from a miniMO connected to my sound card, in turn running sound scope. 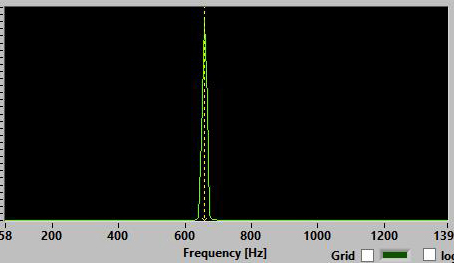 The dashed yellow line is a visual aid

Above is the plot of a sine wave, the carrier, with a frequency around 650 Hz.

First I’ll do Ring Modulation with a second sine wave, the modulator:

The carrier’s frequency has disappeared, and we have two new frequencies, placed symmetrically to its sides.

Now I’ll do Amplitude Modulation, without changing any parameters: 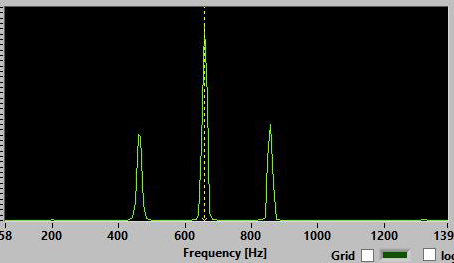 Lord of the Ring Modulations: Return of the Carrier

The carrier is back! Notice that the other two frequencies are still there, but they have about half the height (amplitude) of the carrier. 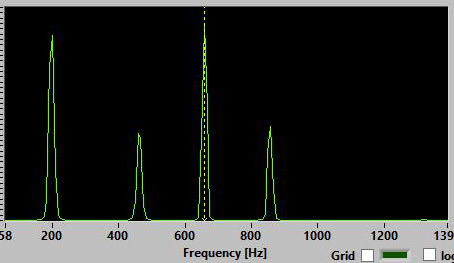 Yet another frequency shows up: that’s the modulator’s frequency, 200 Hz. If you take a look at all the frequencies present here, you can check that in addition to the modulator and the carrier, we also have (carrier – modulator), and (carrier + modulator), at half the intensity.

As we can see, if we modulate the amplitude of a wave with another wave, we get at least the sum and difference of their frequency partials, but depending on something, we can also keep the original partials, too. That something is the polarity of the original waves:

In all cases of amplitude Modulation we multiply the amplitudes of two waves:

Here I must make a note that the name “Amplitude Modulation Plus” is an invention of my own. I haven’t seen the technique described anywhere, but I decided to include it for two reasons: it produces sounds as interesting as those produced by the other two techniques, and, since it shows all the partials involved, it is very useful to study and understand their relations.