So far, all the programs I’ve made available for miniMO have been (modular) synthesis-related. This is still my main focus, but in light of recent events I made a small change in plans and put together a different program, a low power beacon.

As it unfortunately happens, someone stole my bike last week. I had it stored in the cellar of an unoccupied house that belongs to my family; the house is alarmed except for said cellar, and its entrance is at the back of the property, in a place such that an evil-doer may be able to force the locks and gain access without anyone noticing, as was the case.

I’ve been since looking into several options to prevent further break-ins; emphasis is on prevent, because even if the cellar was empty, replacing the locks is expensive. In any case, that’s what was in my mind when I found The Annoy-O-Bug, a project at hackster.io by Alex Wulff which uses the ATtiny to blink a LED and turn on a fixed-tone buzzer in a looping pattern of increasingly close pulses. One of these bugs, I thought, placed behind the door so as to be heard from outside, could pass for an actual alarm-armed tone; acting on that thought, I decided to give the idea a try using a miniMO.

The program I came up with is first and foremost a beacon: that is, it is designed to emit a signal periodically, and last on a battery for as long as possible. In order to accomplish this, the processor “sleeps” in between pulses, turning all but the most vital peripherals off to save power. It keeps the watchdog timer ticking, though; when it times out, it wakes the system up and resumes the program execution, emitting the signal, checking for user input, acting on it and going to sleep again.

This sleep cycle managed by the watchdog is the key to understanding two peculiarities of the program’s operation:

With these limitations in mind, I added a few extra features to the program: 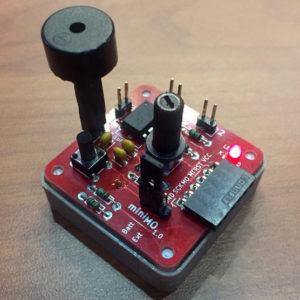 Here’s miniMO with a buzzer attached

So, how low is this so-called low power beacon? Using the 3v battery, in sleep mode with the watchdog timer on, the ATtiny draws about 68uA. That is very low indeed, but the rest of miniMOs cicuit also draws power, around 0.33mA. Sleeping can’t change that, but it makes the impact of the ATtiny negligible; compared to the 5mA miniMO draws when programmed as an oscillator, it is a noticeable saving, and on a 220mAh battery, I believe I could run it for about a month, with a single beep and an 8s interval.