Hello and welcome to miniMO’s site! it’s pretty empty at the moment, but hopefully that will change as soon as I’m done dispatching the fear of the empty site.

MiniMO is short for minimal modular, and that’s the name for my project of building a low-cost synth module, so that anyone can get the feel of how a modular system works without breaking the bank. After a few comes-and-goes, I’ve set on a programmable design based on the attiny85, and my goals are to build a model that I can distribute, and see how many uses I can squeeze out of the tiny beast.

Here, a picture of the bleeding edge in MiniMO development: a prototype of the new PCB-based version on paper and foam 😀 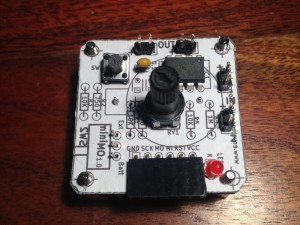 Currently I have parts enough to build a few modules, and I’m waiting for the PCBs to arrive from China. In the meantime, I’ll going to get the site up to scratch. It’s going to take a me a while, since I have to organize all the materials I have and figure out the best way to display them here. Bear with me!